So I was listening to Beyoncé's song Flawless, which features parts of a TED talk by Chimamanda Ngozi Adichie, a prize-winning Nigerian writer. Part of the speech says "We teach girls that they cannot be sexual beings in the way that boys are. If we have sons, we don't mind knowing about our sons' girlfriends, but our daughters' boyfriends? God forbid."

How many times have you heard men joking about the fact that they'll "never" let their daughters date? Partly because they can remember all too well what they were like as teenage boys, and the thought of their daughters meeting anyone like that scares the crap out of them.

But along with protectiveness, there's a bit of competition mixed in; it's not that your average father doesn't want his little girl to grow up and have a happy relationship with a man who loves her; it just gets to him that he won't be number one any more. It's not only dads who feel this way – as we can see from these creepy / hilarious entries from STFU parents, there are plenty of mothers who wish they could marry their sons.

The Chimamanda Ngozi Adichie speech is worth listening to in its entirety because it's full of interesting and important points. But when the frame of reference is a Beyoncé song, cutting the line to say that girls "cannot be sexual beings in the way that boys are" strikes me as disingenuous. OK, so we know that Miley gets ridiculed every time she swings around naked and licks a hammer, Rihanna is generally considered every parent's worst nightmare, and everyone from Demi to Selena to Lady Gaga gets criticised for dressing in skimpy outfits or dancing suggestively. But are their male counterparts really allowed to be sexual without fear of reprisals? We'll probably never know, because the difference is that they don't do these things. 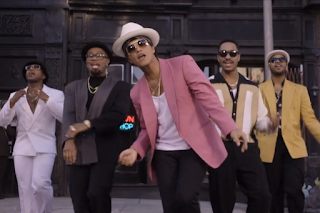 The video for Blurred Lines was infamous for showing fully-clothed men but near-naked women. In  Beyoncé's Drunk in Love video, she writhes around in a bikini while her husband just stands there, fully-clothed. Her video for Yoncé is basically nothing but close-ups of red lips and female flesh from different angles, to the point where it starts to be quite bizarre. Can you imagine Justin Timberlake or Bruno Mars creating the equivalent lollipop-sucking, butt-shaking, crawling-on-the-ground piece of film? Then there's Partition, which is hypnotically beautiful to watch, but doesn't really support the idea that there is more to women than their sexual allure; the same goes for Rihanna's Pour it Up. I suppose the nearest male equivalent to pole-dancers would be hen party-style strippers, but I don't see Drake or Justin Bieber adding this to their repertoire any time soon.

The closest match I could find to these ladies' overt sensuality was Jason Derulo, because he likes taking his clothes off, too. His Want to Want Me video has shades of equality; he's in his underwear in bed, and so is his lady friend... oh but there she is in a basque, watching him perform in a suit. We have several admiring close-ups of her buttocks, while he is shown having a little workout. The message is that his body DOES stuff; it's strong as well as sexy. Hers just looks good, and that's all it needs to do.
We're constantly being told that women aren't allowed to be sexual because of the "slut" double standard. Maybe this was true 30 years ago, but today I think the reason people get their knickers in a twist over the likes of Miley twerking on Robin Thicke is because they're wondering WHY?

WHY do you feel you need to do that? Why don't you let your talent, your voice and your personality speak for you? Are you so insecure that you think getting more and more sexually explicit is the only way you can keep the world's attention? (Incidentally, he was criticised too; because you can only work that "dirty old man" act for so long before people get turned off).

We know that Bey, Miley, Gaga et al are talented ladies who can write songs, contribute to political debate and make their own choices. Beyoncé doesn't NEED to slink around in her underwear; she's just as attractive in jeans and a t-shirt (singing with Eddie Vedder at the 2015 Global Citizen Festival). In defence of her stripper-style antics, she's undoubtedly proving that motherhood doesn't meant the end of hotness, she's talking openly about being a feminist, and her music videos have enough variety to prove that sexuality is just one small part of her repertoire.

But looking at the music industry as a whole... maybe it's time to forget proving how sexual we are and start showing the world all the other stuff we can do.

Failing that, true equality demands that the men need to strip off too. Who's with me?